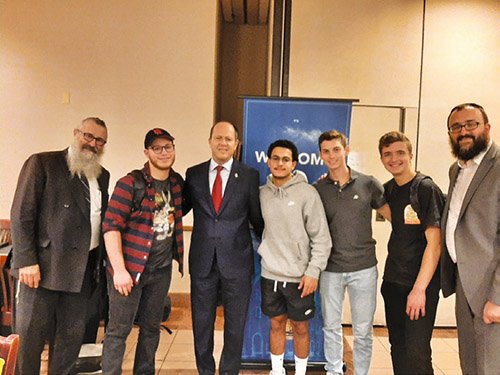 Speaking September 12 before a small gathering of students and community members at Rutgers Chabad in New Brunswick, the former two-term mayor of Jerusalem instead suggested looking toward successful, prospering Arab countries for the answer.

He said when he asks others whether they would prefer to see a Gaza or a Dubai as a future Palestinian state “all my friends say, ‘Of course, Dubai.’ Well, Dubai is an autocracy. There are no elections.”

Dubai is instead one of seven monarchies within the United Arab Emirates where tribal leaders work together to govern, and Barkat said, ‘It works perfectly well” and the ”emirate model” with local leaders from the territories sharing leadership power could successfully uplift Palestinians and have a peaceful coexistence with Israel.

He said in his experience Arabs tend to have a local focus. When Arab residents of Jerusalem are asked how they see themselves they often don’t identify as Arab or Palestinian or even Muslim, but rather as Jerusalemites.

Noting that Israeli Arabs make an average annual salary of $35,000 while those in Gaza make only $3,000, with various salaries in the West Bank falling in between, Barkat added: “The more they cooperate with the Jewish State the better off they are.”

Barkat, who is up for reelection on November 1, is a pioneer in the technology and cybersecurity field who would like to create “a 2.0” Israeli educational system and economy.” With a significant percentage of the Israeli population already employed in the high-tech industry, Barkat said he would like to see as much as 25 % of Israelis involved in entrepreneurial technology ventures in line with Israel’s reputation as the “Startup Nation.”

To do that Barkat would like to revamp the educational system to train and synchronize skills with the demands of the future job market. He would like to see the student evaluation process expanded so that a child’s strengths will be matched to the expected needs of the job market 10 or 20 years down the road.

Barkat said as mayor he lifted the municipal zoning requirements that determined which school a student attended, allowing parents to send their child to the school of their choice, an approach he compared to an American charter school. This approach created competition among schools and “raised the educational level of all students.” It is an idea he hopes to see put in place throughout Israel.

“It will be all synchronized to fulfill the labor needs of the country,” he said, enabling Israel to “exploit the potential” of the educational system.

Barkat said the country should also provide incentives such as allowing inexpensive property purchases that would encourage people to move to less-populated areas like the Negev and Galilee, providing opportunities for entrepreneurship as the country continues to grow.

“It was interesting to hear because here we aren’t voting for him,” said Moshe Tabak, a junior accounting major from Highland Park. “This helps give people knowledge about the situation. If this was Israel he would be trying to get votes, but here he is trying to get people to understand his positions.”

However, another student who would only identify himself as Rafi F. from Middlesex County, seemed a little put off, adding: “This felt very much like a campaign pitch. Why is he coming to us? His campaign should be in Israel where he can go out to his constituents.”